“I will become his family”: a brave young woman tamed a wolf cub abandoned by its mother 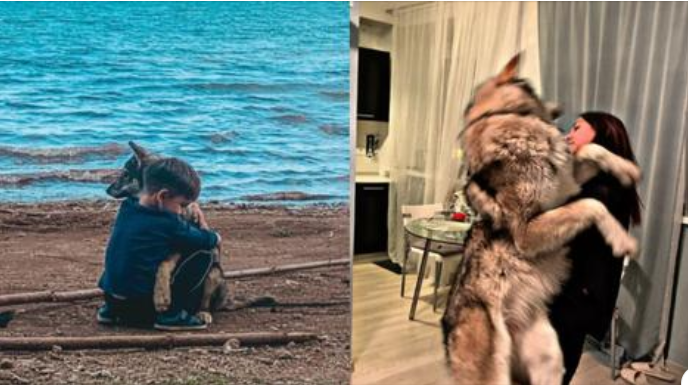 In Kira there are ¾ wolf blood. The mother wolf did not accept the litter: she stopped licking and feeding the offspring. The tiny she-wolf was only a few weeks old and looked more like a stuffed animal. The pup was lucky – the young woman who took it home knew what she was doing. Alida was ready for trouble.

This is not a whim – in the wild, Kira would not have stood a chance because her mother had not taught her to hunt and the puppy had to be fed by the hour with an eyedropper. Alida decided to give the baby a chance at a happy life – not in a cage, not in an aviary, but on the couch, with her family.

The work was not easy. Wolves are very afraid of people and are afraid of everything new, so the process of their socialization is not easy. But a year later Kira calmly communicates with people and other dogs.

Funny that the owner says about Kira herself, “from other dogs”, although her pet is a wolf. But it is easy to forget that, she is so friendly and well-mannered. Kira never attacks dogs first and does not react to aggression from animals worried about the smell of a wolf. She is completely tame and people have nothing to fear from her.

Alida’s seven-year-old son lives with Kira and Alida – and to many of Alida’s followers on social media, such a neighborhood seems dangerous. A wild predator in an apartment with a child!

But Kira grew up with the boy and treats him kindly. She simply loves him – they play together and go for walks together. But before such trust became possible, the owner had to do a lot of work.

“Kira has a stable and soft psyche, she does not react to aggression from other dogs, she does not provoke conflicts. She treats children very carefully, and if a child is afraid of her, she does not approach him.”

Alida took Kira into the house when she was 28 days old – and immediately began socializing her. They went to different places: parks, visits, stores. Alida carried the baby in her arms or walked her on a leash.

She wanted to get the she-wolf used to unusual smells, noise, crowds. The process was difficult for both of them, long. But it was necessary for Kira to live peacefully in the city among people.

When Alida walks the wolf, people on the street are horrified and delighted. They ask hundreds of questions and take photos. And Alida is always ready to answer questions and share her experience and Kira – to pose for a photo.

The dog always comes up to the boy, stands on his hind legs and hugs him: mom has shared recordings of their friendship