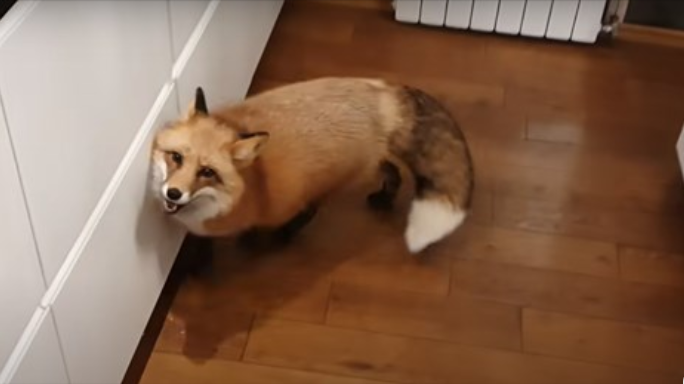 An unusual story happened on one of the British farms. Its owner once met two foxes and now considers them his loyal friends.

Simon Mead is the owner of the farm. The man is already over 50 years old, moves with the help of a stick and does not have excellent health, but he gets strength by taking care of unusual animals.

Before his retirement Simon was a mechanic and after his retirement he decided to settle down on a farm. There he spent his days with his one-eyed cat named Cat.

Mead lived an ordinary and quiet life until one day he found two foxes in his garden. Simon is sure that the animals were hiding from the hunters: Fox hunting with hounds is often organized in the area.

The man decided not to drive the animals away and help them hide from danger. He offered them food and then noticed that the foxes were in no hurry to leave the farm. Mead began feeding the animals regularly and even gave them nicknames – Willow and Hannah.

Foxes have been permanent residents of the farm for several years. And Simon not only feeds them regularly, but provides them with a full diet every day. For each fox, he buys five cans of dog food each day, as well as stick treats.

To feed the animals, the man spends a lot of money every month – up to 150 pounds sterling. After the purchases, Mead has money only for the essentials. But he does not refuse such expenses and understands that active wild animals need more food because they consume a lot of energy.

Willow and Hannah are really energetic. They willingly romp with Simon’s cat, run around the farm, and even play pranks.

The foxes have stolen Mead’s stick more than once, and he has had to waddle along behind the fence or the wall of the house to find it and retrieve it from the bushes.

Hannah and Willow consider Cat an authority, obeying him. And Simon is like a father to them. Mead himself does not understand why the foxes trusted him, but he is sure that it was they who made such a decision.

By the way, as a child the man had a fox Vivienne, which he led on a leash. So the connection with these animals for him is special and long-standing.