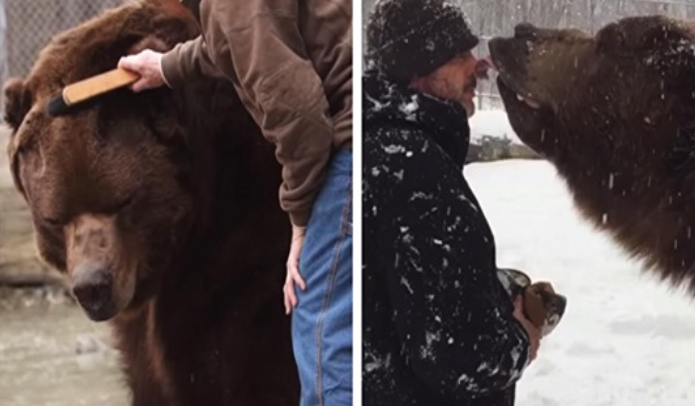 Wild animals live in the wild for a reason. It’s impossible to really tame them, so they have to live in their natural environment. When a wild animal gets into captivity, it is usually quite dangerous.

However, one wild animal was the exception to this rule.

Jimbo was a Kodiak bear that grew up in captivity. One fatal day, Jimbo was injured and adopted by Jim Kowalczik. Jim knew Jimbo was a wild animal, but Jimbo had never lived in the wild. The little bear would never be able to survive in the wild.

There seemed to be no other option, so Jim Kowalczik made the little bear part of his family. With his wife Susan, Jim ran the Orphaned Wildlife Center in Ottisville, New York. Together, they cared for injured bears. When bears came out of the wild, they released them after they recovered.

Jimbo was an exception. He lived in the sanctuary with 11 other bears until the end of his life. Some of the bears were orphans, all alone in the world. Other bears had survived collisions with cars. Jimbo soon became the favorite bear of the Kowalczik family. He was photographed playing with the family and videos of Jimbo show how much he enjoyed being with Jim.

Unfortunately, Jimbo fell ill in February. The Kowalczik family tried everything. They gave him medication, but it didn’t seem to help. Jimbo was getting sicker and sicker.

Finally, they discovered the problem.

At age 24, Jimbo had developed liver cancer. Although he was in pain most of the time, he was still the kind, adorable bear the family had fallen in love with back then. As he got sicker, the family spent more time cuddling Jimbo. They did their best to keep him as comfortable as possible. A month later, Jimbo passed away. Susan and Jim couldn’t believe he had passed on. After 20 years of him being such a big part of their family, it seemed impossible to imagine life without Jimbo. He was truly a one-of-a-kind bear.

The lovable bear will always be remembered by the Kowalczik family. Now the whole world gets to see this wonderful bear in action. Through the adorable pictures and videos, the family will show everyone what this unusual bear was like in the flesh.

Help the Kowalczik family cope with the loss of this friendly giant by telling everyone you know about this story.